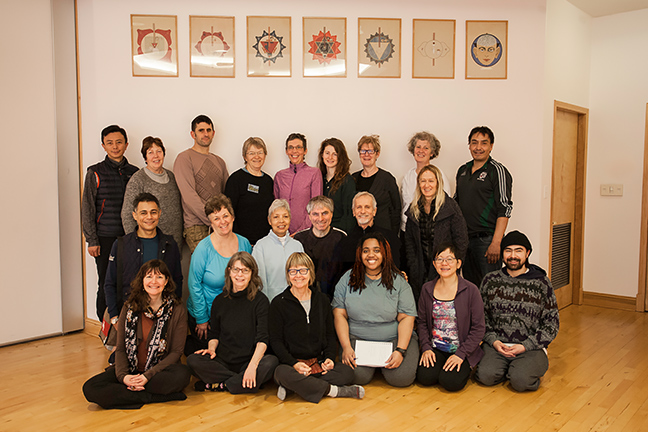 The 48th Yoga Development Course (YDC) began on January 9 with 23 participants from six countries. Leigh Cole from Toronto and Karin Shell from Whitehorse, who have known each other since they were teenagers, reflect on unexpectedly seeing each other in the course.

“It felt like a dream,” says Karin. “I looked over and thought that looks a lot like Leigh Cole. You must be a bit tired, Karin.”

“I’d never been so surprised in my life,” says Leigh. “It was at the beginning of a Hatha class since Karin was late to the course, and I had to wait for two hours before I could go over and throw my arms around her.”

They met at 1975 in Carcross Community Education Centre, a spiritual community in the Yukon. Over the years they ran a business together, lived in a tipi in the bush over the winter and reconnected at a reunion in Carcross in 2014. There they found out each had been to the Ashram — Karin for a 10 Days of Yoga and Leigh for a Karma Yoga Retreat.

“I really appreciate having Karin here as a reality check for me,” says Leigh. “We’ve shared important parts of our lives and now we get to share this.”

“Being here together creates some integration,” says Karin. “At the beginning of our lives—at 17 and 19 — we were searching, looking for change. Being here now is a continuation of that exploration. When I saw Leigh it was an affirmation I was in the right place. I’d been concerned because I was late arriving and wondering if this was the right thing for me right now. Divine Mother got us both here and now I know this is where I need to be.”