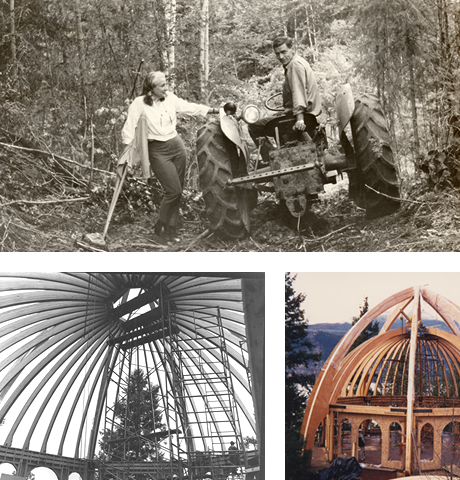 It was 1956 when Swami Radha returned to Canada after her stay in India, with the words from Gurudev Sivananda as a guide: “When you leave here, go where you have mountains in the back, water in front, and trees all around. The mountains will give you strength and energy, the water will calm the mind, and the trees will offer you protection.”

Landing in Montreal, she started the Sivananda School for Yoga and began touring, giving lectures and teaching across Canada. A small group of students asked her to move to Vancouver, and together they bought a house and started the first ashram in Canada, in Burnaby, BC in 1958. They also opened the Yoga Vedanta bookstore on Robson Street in downtown Vancouver.

In 1962, Swami Radha started her search for the place that Sivananda had described. This led her to the Kootenays where she found the property that is now the Ashram. By chance, the name “Yasodhara Estates” appeared on the earliest land title. Yasodhara was the wife of the Buddha, Yasoda was Krishna’s mother. Although from the Sivananda tradition, Swami Radha decided to keep Yasodhara as the name for the Ashram in recognition of the importance of the feminine principle in spiritual life.

Originally a homestead of 85 acres, the Ashram had a small orchard and only three buildings. In 1963, the work of creating the Ashram began, with residences built and land cleared for garden and farm space. Swami Radha and her small, dedicated community laid the foundation of Yasodhara Ashram as we know it today.

On November 30th, 1995, Swami Radha passed away. In her final message she said:

“Together we have been walking the path for a little while just as we have done many times before. For now, all is done that can be done. Keep on going. Stand alone. Be courageous. Meet in yourself all that has to be met – the highest and the lowest, the good and the not so good – knowing that all passes, just as ignorance passes as you keep on learning. Remember, each step sets you free.”

Since its founding, Yasodhara Ashram has welcomed thousands of people from all over the world, created a publishing house, run an award-winning magazine and inspired centres across Canada, the US, Europe, Australia and New Zealand.

Swami Radha’s legacy is an enduring community, now led by Spiritual Director and President Swami Lalitananda. A new generation of dedicated yogis continue to uphold Swami Radha’s vision, while stewarding the Ashram into the future.