The Passing of Swami Radhananda, Past President and Spiritual Director Yasodhara Ashram, BC 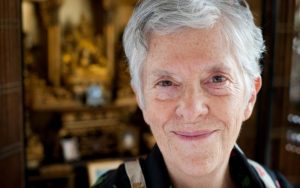 Kootenay Bay, BC – Swami Radhananda, president and spiritual director of Yasodhara Ashram from December 1993 to May 2014, passed away peacefully January 28 at the Ashram on the East Shore of Kootenay Lake, BC.

In her 20 years of leadership of the Ashram, Swami Radhananda introduced an experiential style of teaching that empowers people to make their own discoveries, fosters a focus on harmony and inclusivity, and encourages young people on the spiritual path. She also set the Ashram on its environmental sustainability focus, ensuring that it will be a place of learning and transformation for generations to come. She was a spiritual leader who embraced humility and courage, and she was especially supportive of women fulfilling their potential.

Swami Radhananda was a devoted disciple of Swami Sivananda Radha, who appointed her as successor before her death in 1995. Swami Radha established the first ashram in Canada in Burnaby, BC in 1957-58 before founding Yasodhara Ashram – a yoga retreat & study centre and residential community – in the Kootenays in 1963.

Swami Radhananda first came to Yasodhara Ashram in 1977 as Mary-Ann McDougall – mother, wife and teacher – where she met Swami Radha and became a lifelong student of this spiritual lineage of yoga. She was the director of Yasodhara Yoga Centre (then Shambhala House) Lethbridge, Alberta from 1986 to 1990, when she moved to the Ashram. She had a rewarding career as an educator and consultant.

Swami Radhananda is the author of a memoir about her time with Swami Radha, Carried by a Promise: A Life Transformed by Yoga, and a book of inspirational essays, Living the Practice, Collected Writings on the Transformative Potential of Yoga. Both books express her practical approach to yoga..

In Living the Practice she writes: “How do you live your yoga practice? Start small. Make a commitment. Follow through. Keep doing it until it works for you. Test it out – don’t just do a practice in your room. Try it in real-life situations. You can bring the practices into whatever you do – cooking, gardening, driving your car, working, being with people. An ordinary life infused with practice becomes a meaningful life.”

Swami Lalitananda, who in 2014 was appointed as president by Swami Radhananda, states, “Although we are saddened by her passing, we are also joyful for her liberation. She has fulfilled her promise and lived a life transformed through yoga. We will continue to learn from her wisdom through her books, videos and through our memories of precious times with her.”