Home » News » On the Road – Traveling Opens up a Spiritual Pursuit 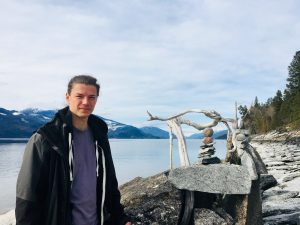 Simon Zielfelder, 20, from Berlin, Germany, arrived in Canada on an adventure, not at all looking for a spiritual journey. But traveling can be like a dream, restoring within us images from a deeper realm, giving us cues and clues that may not make sense at first but in time reveal the path we are meant to travel.

Starting on Vancouver Island, Simon ended up in an Eco Village that taught yoga – his very first introduction to it. His next step was saying ‘yes’ to a road trip through the Rocky Mountains. “It was quite expensive but I just thought, yeah, this is good. I did the road trip for two weeks and from there everything built.” He met someone who directed him to a First Nations reserve that gave dog sled tours. “I thought this guy may need help later in the winter season. I stayed there for seven weeks and I was introduced to the power of sweat lodges.”

After a few more adventures, he says: “I was hitchhiking to Nelson and the woman who picked me up told me about the area and that there is an Ashram.” He decided to sign up for the One-Month Karma Yoga Program. After completing that month he stayed for another. Simon says about the Ashram, “This has been a really good place to focus the mind. I now have lots of tools to take with me for whatever comes.”

“I can definitely see how things fall into place. There were two paths and I chose one of them. The other is still there but I’m not going on it. And I can see the Light through all these decisions. It wasn’t me just being lucky; it was some kind of destiny.”