The Ashram has made the difficult decision to remain closed through 2020. We plan to re-open for the Yoga Development Course in January 2021. Please note that the grounds and buildings, including the Temple of Light, are now closed to public access. As a residential community with an elder population, we are taking extra safety precautions while the virus is still active.

READ MORE about our new online classes and a limited number of longer stays in Retreat Cabins or with Karma Yoga. 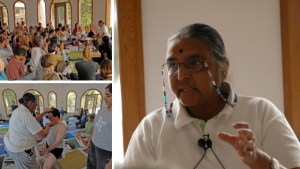 On December 16, 2018, Geeta Iygengar passed away peacefully in Pune, India. Geeta dedicated her life to furthering the work of her father, B.K.S. Iyengar, and to initiating greater understanding of yoga for women in today’s world.

In the spring of 2008 Geeta Iyengar came to Yasodhara Ashram as a guest teacher for an ascent magazine intensive. It was another moment when the two lineages of Swami Radha and B.K.S. Iyengar came together.

The first time Geeta and Swami Radha met was in Pune, India in 1982. There, along with Mr Iyengar, they engaged in exploring the work each was doing. From these conversations, further meetings took place in Canada and Timeless Books became the first publisher of Geeta’s Yoga: A Gem for Women.

During Geeta’s 2008 Ashram visit, she spoke of her time with Swami Radha in India and how they explored many aspects of yoga. She remembered how Swami Radha encouraged her as a woman teacher and how they agreed that “Yoga is one.”

Shirley French, the founder of the Iyengar Yoga Centre of Victoria, writes, “A day after ceremonies to mark the centenary of the birth of Yogacharya B.K.S. Iyengar, we were saddened to learn of the death of his oldest daughter and foremost disciple, Geeta. Once, during an interview, Geetaji was asked how it felt to live in the shadow of her esteemed father. Without a moment’s hesitation she responded: ‘I do not live in his shadow, I am living my life in my father’s light!’ Geeta became a great spiritual teacher in her own right, known and respected all over the world. Now, having fulfilled her duty in exemplary fashion, may she rest in peace in the Light.”