“Time is the longest distance between two places.” (Tennessee Williams) This could not be truer than here at Yasodhara Ashram. Time works differently here: time speeds up and slows down in unpredictable patterns. It steals hours and days from me only to pile them up somewhere else. Seconds crashing into minutes, reversing their course only to wrap themselves into days and explode into weeks that barely trickle into months.

After the first month here, I gave up all illusions that I could keep track of time. Accepting that the flow at the Ashram is its own and is not subject to time in the same way other places are. The millions of years it took to build such a dynamic place have a life of their own, a wild spirit that calls to those of us who are crazy enough to believe in ourselves. 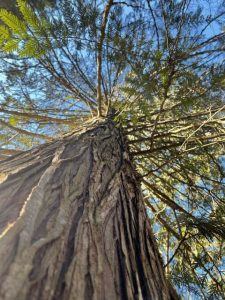 As a Sinixt woman Indigenous to this land but never having been able to spend a substantial amount of time here, my arrival to Yasodhara felt very much like a homecoming. My connection being so deep, I feel and recognize it as an extension of my being – as if a strand of my very own DNA comes from the rocks scattered across the beach. Standing silently on the land I hear it whisper my name. Ksxan…

This profound feeling of connection inspired me to gain an understanding of the land in deeper ways. As a person who believes and follows natural law, I looked to the rocks. I believe, as with human beings, every place on earth shares a connection with the Creator and may access and communicate with that power in its own unique way. I suspected that this land’s connection was rather intense – like this place is a Rock Guru, holding deep knowledge it is ready to share with anyone who asks and who is willing to put in the work to understand.

This land is dynamic and special, having been touched in ways that very few other places in the world can be touched. The west side of Kootenay Lake used to be the edge of North America. 170 million years ago two tectonic plates crashed into each other creating the many mountain ranges and distinctly tall mountains of the Kootenays. This collision created a tectonic suture zone on the west side of Kootenay Lake, bringing together three layers of very distinct land masses piled one on top of the other. If the vegetation of the mountains on the west side of the lake were removed a person could see these three distinct layers: the bottom layer being made of the ancient North American coastline, the middle layer which is now white marble being made up of the ancient sea floor and the top layer being ancient volcanic islands that once stood in the middle of the Pacific Ocean but now rest on the top of mountains overlooking Kootenay Lake. This massive meeting of worlds crumpled rock layers together and created a dynamic geological gold mine – literally. 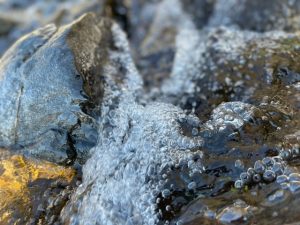 The land all around Kootenay Lake is made of an interesting mix of stone and precious metals all of which contribute to the power of this location. Marble is commonly used as a grounding stone and aids in physical and spiritual balance. As groundwater and runoff move down the mountain and heat up, some seeps through cracks and crevices in the mountains. Due to high levels of silica found in the water quartz crystals form. Quartz is linked to spiritual growth, awareness and wisdom and is often worn and used by individuals to increase these properties within themselves. These hot acidic waters are not only responsible for creating quartz but are also the reason this area is so rich with precious metal ore. As this hot water seeps through the ground and interacts with the limestone below the surface it creates gold and silver ore, which are both known to have healing properties for the skin. Dolomite, another geologic mineral found within the geological makeup of these mountains, is especially used to balance the chakra system and ground emotions.

It is no wonder this place is vibrating with energy; we are sitting on top of millions of years’ worth of spiritual growth and balance.

If the smashing of volcanic islands wasn’t enough to create the spiritual wonder we know today, about 10 million years ago these volcanoes became extremely active, building new land mass and carving enough land to reroute the Columbia River. These volcanoes created the Columbia Plateau which now covers large areas in Washington State and Oregon. Two million years ago the world went through an ice age and almost all of British Columbia was covered by a sheet of ice. As the Ice receded it left deposits and rocks from its movement all over the area, leaving us with a beautiful rainbow of geologic wonder – a monument to the proficiency of time.

It took over 500 million years to build the landscape we now reside on. This area is intensely unique in that there are only 15 major tectonic plates in the world and two of them are sutured together right here at Kootenay Lake. When Radha dreamed of this place it is no doubt that the Rock Guru here on this earth called to her in the same manner Gurudev Sivananda did. It knew she was looking for it and spent millions of years making itself worthy of the task. This place knows and understands its responsibilities and gives openly to all of us – only requiring one’s belief in themselves and a willingness to work. 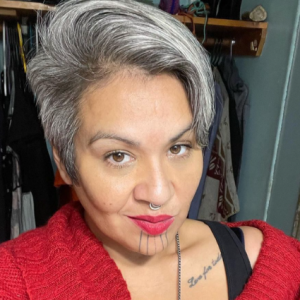 Ksxan, also known as Stevey Seymour, is a Sinixt poet and a member of the Colville Confederated Tribes. She has dedicated her life to the revitalization of the Sinixt language and culture. She is currently participating in the Ashram’s three-month Yoga Development Course.