Almost four years ago today, I found myself in a prayer circle where an Elder was leading a blessing. There were about a hundred people gathered together and it was completely silent as he spoke, so that everyone could hear the prayer. After he finished speaking, the silence was pierced by a roaring boom of thunder directly overhead. It was an extraordinary moment that felt as though the Divine was affirming our collective intentions and the power generated by the group, gathered together for a common purpose.

The purpose of our gathering that day was to participate in an act of nonviolent civil disobedience in opposition to a new tar sands pipeline. This 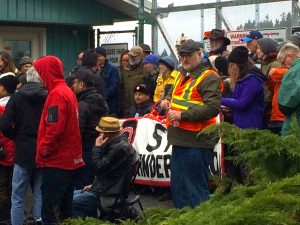 took place on Burnaby Mountain, just outside of Vancouver, BC on the territory of the Tsleil-Waututh Nation who do not consent to bitumen snaking through their land or coastal waters. The previous week I had attended a rally of about 10,000 people, where members of the Tsleil-Waututh, Musqueam and Squamish Nations—whose land and waters would all be directly affected by the pipeline—had asked us to join in this act of resistance. We were united in opposition to this project that poses an unacceptable risk to our water, our communities, and our climate.

So a group of us hiked to the gate of the large American oil corporation where construction for the pipeline was underway and refused to move from in front of it. We weren’t blocking traffic into the facility, as there was more than one entrance. But when the police arrived and asked us to move, we peacefully declined to do so. We were violating an injunction to keep protesters several meters from the property, and our presence there was part of a strategy of civil disobedience that was successfully employed in protecting old growth in Clayoquot Sound in the 1990s.

I was near the end of a long lineup of about 50 people who were slowly arrested and taken away. When it was my turn, six RCMP officers surrounded me and marched me into custody. After a mugshot and some processing, we were all released on a promise to appear in court.

About a week after my arrest, I was served a stack of papers at least a couple of inches thick. We were being sued by the oil corporation, which was headquartered in Texas, for around 100 million dollars, a ridiculous amount of money. When split up amongst the group of 50 plus people, it was a daunting prospect.

After the first day of court some weeks later, we were all sure that we would be doing serious jail time. The judge assigned to our cases was far from sympathetic, but the ‘positive’ thing to come out of that first court appearance was that the lawsuit was dropped because the corporation had convinced the Crown to take over the case for criminal prosecution. I decided to defend myself, which ultimately resulted in receiving about 30 hours of community service, or Karma Yoga, as I like to think of it. Though for this Karma Yoga, instead of swamis I had a probation officer.

The arrests continued, and in an attempt of the court to stifle protest, many of those individuals ended up serving 1-3 months in a maximum-security prison. This included Elders who performed ceremony outside the gates. They were forced to complete their sentences early in the pandemic, putting them at tremendous risk. As construction for this pipeline and other environmentally disastrous extractive projects proceed throughout the province, folks have continued to resist them, and the court process is still ongoing for many. I just received news that there are upcoming sentencing hearings for still more arrestees.

The experience of challenging colonial law has affirmed for me that there is no law greater than Natural Law. If those in authority have legal license to jeopardize the land, water, and communities that support us—all that is sacred to us—I am called to appeal to a higher law.

But this story isn’t a sales pitch for civil disobedience, or as Gandhi referred to it satyagraha or “truth force.” I realize now that it is emblematic of a philosophical debate I was having within myself about how to live my values in a way that is meaningful and to best be of service in the world. I think I was stuck in a false dichotomy of feeling that the need to take action and accomplish something in the world was somehow at odds with the pursuit of spiritual ideals, as though they are mutually exclusive and I had to choose between the two.

It does seem to me that we’re living in a time where the sacred is increasingly under threat, and protecting what is sacred feels imperative. Though, if I’ve learned anything as a student of yoga, it’s that the real battleground is not necessarily external—it should be understood and confronted by going within and facing ourselves and whatever we find there head-on. It’s a logical point, not just a metaphysical one that if we want peace and justice in the world, we need to find it within ourselves at an individual level first.

In Kundalini Yoga for the West, Swami Radha states that “the course of evolution, the purpose of life, is the attainment of higher consciousness.” By coming to the Ashram and pursuing my own evolution, I am taking a stand to protect and nourish the sacred within myself and the sacred within my life. I’m allowing a new way of being to come forward, embodying a balance of taking action, while also maintaining my connection with the sacred.

In Living the Practice, Swami Radhananda writes: “The world that we are living in now needs healing – the healing qualities of positivity, silence, relaxation, care, compassion and cooperation. Living on sacred ground would mean that we have all the elements to support our spiritual life, an inner life where we can build the foundation of character, courage and awareness. Ask yourself: How do I create sacred ground? What seeds nourish and support my spiritual growth?”

I’ve decided that I want to live in the realm of the sacred. I choose to honour, protect and nourish all that is sacred to all of us and within all of us. So, in closing, a little song I learned on the front line: “Courage my friend, you do not walk alone. We will walk with you, and sing your spirit home.” Namaste. 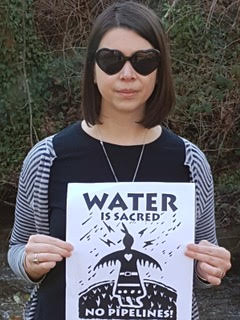 Tracy hails from W̱SÁNEĆ territory on Vancouver Island where she worked as a braillist in the public school system. She recently completed the transformative Yoga Development Course, and is a lifelong student of yoga. She stands in solidarity with water protectors and land defenders around the world.