We are open for 1, 2 and 3-week Retreats as well as the Two-Month Karma Yoga Program. We remain closed for drop-in visitors. Read More. Donate Now to help sustain the Ashram. 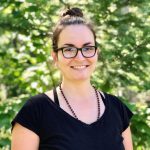 “I have been writing songs since I was 13, and although inspiration and creative output come and go in waves, the current never stopped… Since coming to the Ashram, other means of expression have been prevalent, and there’s been (and continues to be) much work on other levels to be done, but at the same time I have discovered new layers to my work, and feel that my songwriting has taken on a different tone – lyrically, in particular, the symbols have become more colourful, and the messages seem to be taking on a deeper meaning. I’ve come to accept my art as a sporadic visitor, when intuition speaks and inspiration springs, and I’m very grateful for this space I get to do that in, and for the dedication to the arts that are part of our lineage.

This particular song originated in a Women’s Circle we held a couple of months ago, were we read a story from Women Who Run with the Wolves by Clarissa Pinkola Estés, Ph.D, and then just allowed inspiration to “do its thing”. The story was called “La Lloba”, and talks about a woman collecting bones – which is where the first verse came from. Throughout the process of decorating a bag (for the bones, you see), more and more lyrics came, and a couple of weeks later, when I revisited them, the rest of the song just kind of fell into place, and so did the music. I love when this happens – it’s the most organic way of creating, I find: To just allow whatever it is that wants to express itself through me to come forward. That night in the circle was the same: There was an atmosphere of trust, of being held in each other’s company, an understanding without words. It felt sacred, which is why I think that source was able to open up.”

–Jess Schroeter has been living at Yasodhara Ashram since 2019, and is mostly playing strings in the famous Elastic Band these days. When inspiration strikes, she writes and plays her own songs, too, some of which you can find on Soundcloud, or Facebook.

Back to the Saraswati Muse