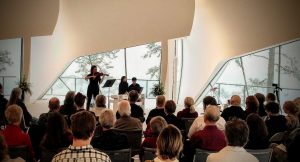 Soft falling snow outside and warm melodious music inside created a special atmosphere for a pre-Christmas recital in the Temple. Violinist Natasha Hall and pianist Yoomi Kim drew a sell-out crowd of 100 – an example of the potential of the Temple of Light to bring community together for music, devotion and inspiration.

“In Europe we often play in big cathedrals but this space is one of a kind,” commented Natasha. “It’s so beautiful and surrounded by nature. This may be my favourite place to play.” Her connection to the Temple – her father Ted and brothers helped build it through family-owned Spearhead of Nelson – enhanced her heart’s resonance to the concert.

Natasha brings an enthusiasm for yoga to her music. “I’m interested in the conversation between nature, music and movement, developing that whole-hearted way of listening. It’s also important to understand the connection between my breath, my body and my art. I’m interested in a much more wholistic approach towards music.”

“With its official opening in 2018, the Temple is like the flowering of the lotus,” notes president Swami Lalitananda. Last year, 2,000 people dropped in – up by 500 from the previous year – to tour the Temple and Ashram grounds. Media also visited to experience all that we and our local East Shore community offer. Recent articles appeared in Seattle Yoga News, Architectural Record, Canadian World Traveller, Azure Magazine, Escape Here – with more to come!