“A place of Light is a place of love” 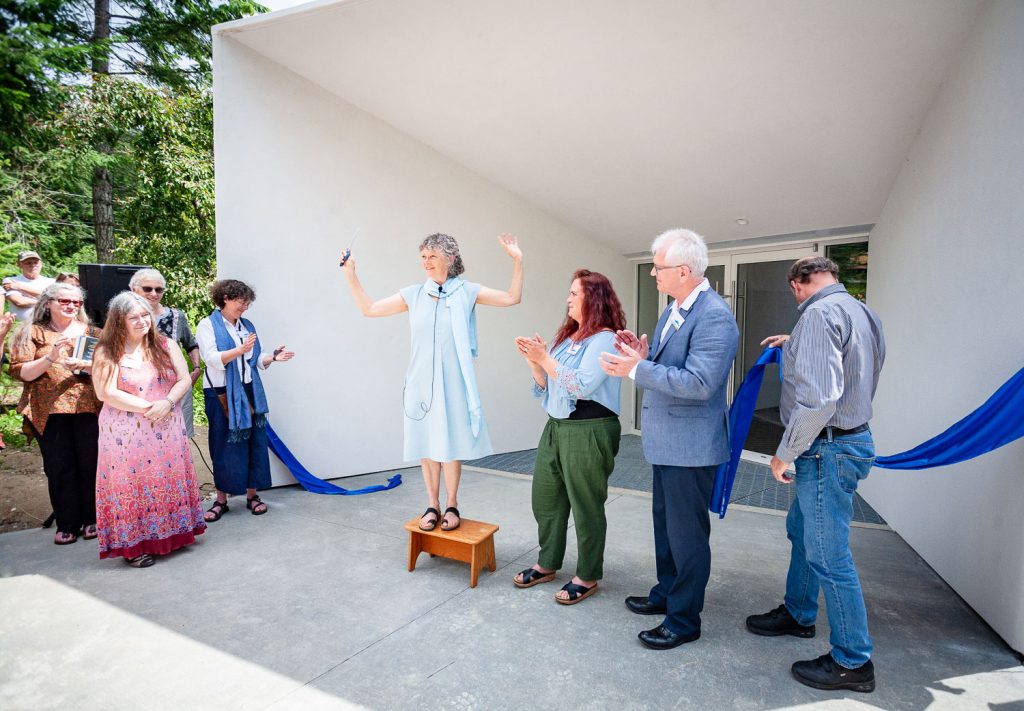 On Saturday, June 23, Yasodhara Ashram hosted almost 700 people from around the region to celebrate the Official Opening of the new Temple of Light as well as to enjoy our 24th Annual Strawberry Social. The bold new Temple replaces the original, which was destroyed by fire in 2014. The new Temple continues to hold the vision of hope and peace, where diverse traditions are honoured. “There is so much division in the world so we need a place to remind us to come together. And a place of Light is a place of love,” Swami Lalitananda, the Ashram’s president, said in her opening address.

Mayors from both Nelson and Creston attended, and the ribbon cutting ceremony included representatives from our area: Garry Jackman (Director of Electoral A of the RDCK), Gina Medhurst (President of Kootenay Lake Chamber of Commerce) and Wayne Stetski (MP for Kootenay-Columbia). Swami Lalitananda led the ceremonies with a heartwarming welcome, thanking everyone “who is attracted to a sacred space.” After the ribbon was cut about 300 people filed into and around the outside of the Temple to listen to the opening reflections. The three local representatives spoke of the Ashram as a valuable member of the community. Gina described the Temple as a place “where we can come back to the circle, to the centre.” Garry highlighted projects the Ashram has been active in recently, while also attracting younger people to the area. Wayne shared his experience of visiting the War Museum in Ottawa, which led him to ask, “Why can’t we learn to get along? If I had one wish it would be to take the caring, the welcoming of diversity, the love

you see every time you come to the Ashram and spread that all over the world. We would have a much better world.”

The opening remarks were followed by performances by Slava Doval’s DanceFusion, a group of young dancers from Nelson. Slava – Nelson’s Cultural Ambassador for 2018 – is a former East Shore resident and Ashram Teen Program participant. The young dancers performed three inspiring pieces, while Slava offered her own amazing creation and performance. She credits the Ashram for the formative experience in understanding that dance can be a sacred art that speaks to the spirit. The dancers received a warm and enthusiastic response.

The entire celebratory opening was live-streamed to homes around the world and also to Mandala House, where the Ashram’s overflow visitors could watch the Temple events unfold. The finale of the day was showing the video, Temple of Light by Gem Salsberg, featuring interviews with Ashram guests and residents as well as with the architects, fabricators and contractors.

The day was a tremendous success. An intention was fulfilled—bringing the community together to join us in celebrating our beloved new Temple of Light, a magical place in the Kootenays where people can come to appreciate the quiet beauty and sacred space.

Check out our Facebook page for more photos from the Temple Grand Opening and Strawberry Social.