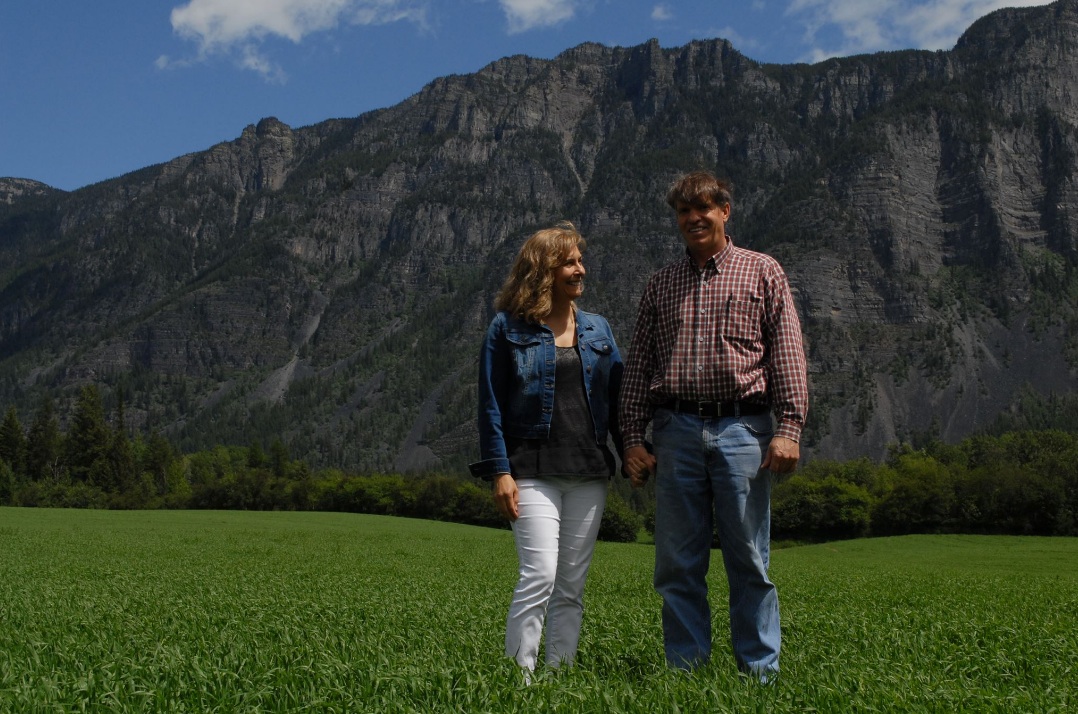 Our new Farmer Profiles Series features the local farmers who feed us and who share our passion for sustainable agriculture.

In a fast-food world, the practice of growing grain then milling it in the same operation is a lost art. Treasure Life Flour Mills of Creston does just that, bringing old-world certified organic, healthy grains to the Kootenays.

Wanting to get back to the land and to make a healthy contribution to the food system, Ben and Claudia Herrera purchased 65 acres in the Creston Valley in 2008. Both had been working overseas in the oil and gas sector.

They considered growing berries and raising animals, but decided instead to pursue their curiosity about heirloom grains. A treasure hunt for high quality heirloom seeds manifested in Treasure Life Flour Mills, where they now farm over 800 acres and mill their own grain.

Initially finding seeds was challenging. They started by buying out the University of Alberta’s seed bank of 43 varieties, and then they contacted seed banks all over North America. They also connected with retired farmers — even purchasing an old variety from an elderly farmer who had stored seeds in his freezer for almost 50 years. Their search is never over, but after testing hundreds of heirloom grains, they have selected 23 varieties that grow well in Creston.

Talking to Ben is a trip through time with his encyclopaedic understanding of the history grain and what we eat today. Landrace is an original grain grown by the ancients, and the DNA of Landrace remained unchanged for thousands of years. In the 1600s, Ukrainian farmers selected Ladoga, a strain of Landrace, which Treasure Life now grows.

“There were several junctures in the last 100 years when Canadian wheat was being modified, but the most damaging was in the 1980s when the actual molecular structure of the carbohydrates in the grain were altered,” says Ben. “That’s when you see the spike of gluten intolerance in North America.”

Growing ancient grains can be more taxing than traditional agriculture, but for Ben and Claudia, it’s their passion. “We do it because we love good food,” says Ben.

Yasodhara Ashram’s chef, Steve Kruse, has been purchasing Ladoga baking flour from Treasure Life for over a year. The result equates to chewy bread that’s full of flavour. When he started working at the Ashram five years ago, Steve says the kitchen had stopped baking bread from commercial flours because many residents had trouble digesting it. When Steve began baking with Treasure Life’s flour, feedback confirmed it was easy to digest.

Supporting businesses and farms like Treasure Life Flour Mills aligns with the Ashram’s emphasis on awareness, quality and ecological stewardship within our food procurement. The Ashram acknowledges the vital role food plays in the operation and health of all communities.