The Ashram has made the difficult decision to remain closed through 2020. We plan to re-open for the Yoga Development Course in January 2021. Please note that the grounds and buildings, including the Temple of Light, are now closed to public access. As a residential community with an elder population, we are taking extra safety precautions while the virus is still active. READ MORE about our new online classes and a limited number of longer stays in Retreat Cabins or with Karma Yoga. 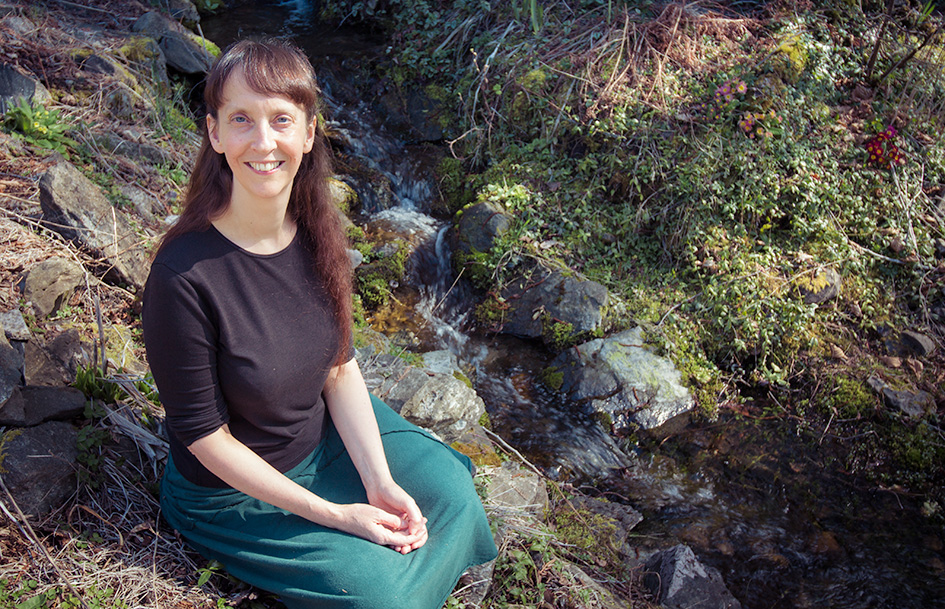 Kathleen Wood, a musician and teacher based in Ontario, first came to Yasodhara Ashram in November 2015 for a month of Karma Yoga and quickly decided to return for the 2016 Yoga Development Course (YDC). Post-YDC, she is now finding ways to continue integrating the music and yoga strands of her life.

In recent years I have been playing the piano and composing music only as required for work projects and not for my own interest or enjoyment. I was not sure if I had lost my way musically or just been worn out by academic projects. During the Yoga Development Course this year, I returned to musical basics: breath, pulse, mantra; combining breath and pulse; singing bhajans while walking back to the Barn.

When we were introduced to various mantras, I was taken back to my childhood. Long before I encountered a piano or had any lessons, I used to make up short simple little melodies and would play them over and over for hours on my toy instruments. During the workshop, the mantras were repeated over and over. The notes attracted multiple layers as the repetitions continued. First the words: Hari OM; then the notes: Bb C F. Then colours began to emerge: dark violet, crimson, a slightly olivey-forest green. . . That was new. I had always had colour associations with certain notes and keys, but it was always a loose, faint, shifting thing.

It seemed this yoga was creating a musical renewal, a new layer that took me by surprise.

Since early on in my piano studies, I had had problems with breathing while playing. All that not-breathing creates tension, in my finger, hands, arms, shoulders, core. It can also lead to mini-blackouts, to memory lapses, setting up a cycle of fear, more tension, more breath-holding. My little forays into playing the harmonium taught me much about breathing at the keyboard. If I neglect to pump the bellows as I play, the air supply runs out after a few notes and no sound will be produced. The instrument requires a continuous supply of air and reminds me that I do, too.

Yoga is union. For me this union is between the musician and the part of myself that goes to Hatha classes and comes to study at an ashram. When studying the eighth discourse of the Bhagavad Gita, we were asked, “What do I place on the altar in my heart?” and told, “What we place in our heart, we become.” My mind, overloaded with group discussion, didn’t have a chance. Music of Bach was already thundering in my ears, filling my heart and vibrating through my body.

Having Bach in my ears and heart and mind, I walked back to the Barn after class. I paused on the little bridge over Krishna Creek. In German, Bach means stream or creek. “Krishna Bach,” flowing to the lake. I think about my years of music study and my career. It seemed as though the intensive development and the pressure, external and internal, together were like a dam in a river. A dam can create a lot of power but it can also wreak havoc on both the river and the surrounding land and living creatures. The YDC showed me that my musical salvation will come through un-damming the river, allowing the flow.

“In recent years I have been playing the piano and composing music only as required for work projects and not for my own interest or enjoyment. I was not sure if I had lost my way musically or just been worn out by academic projects. During the Yoga Development Course this year, I returned to musical basics: breath, pulse, mantra; combining breath and pulse; singing bhajans while walking back to the Barn.”