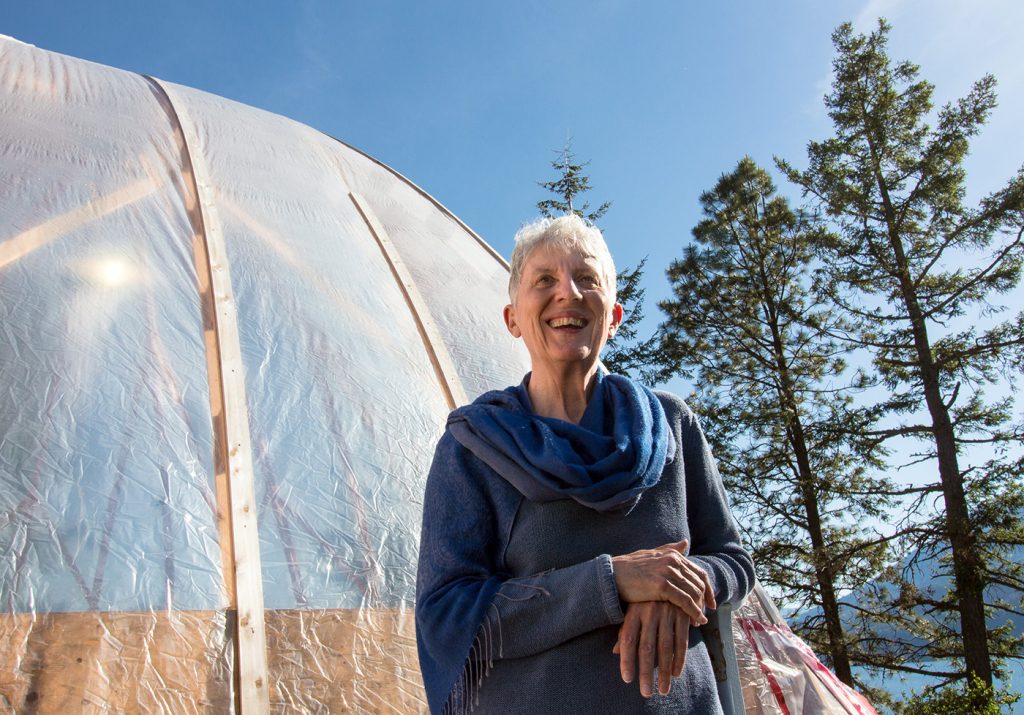 After the Temple fire one year ago, I felt at first a deep grief, a numbness that said, “Is this true – has it really happened?” And yet with every tragedy there is an experience of opening, a realization that there is something more behind the scenes that I just get a glimpse of… perhaps “awe” is the best word to describe it.

The fire showed us our strength as a spiritual community. We reached out to each other, and others reached out to us in a continuous expression of loving. It was all at once and ongoing – loss, letting go and opening to the next phase. It was a profound teaching.

Swami Radha says that part of the practice of yoga is letting go of the ideas in the mind. For me, part of the grieving has been letting go of the image I held in my mind of how the Temple used to be. As I began to let go of my old ideas, the lightness and the beauty of the new design delighted me. The architects, Patricia and John Patkau, used the word “luminosity” right from the start and it is that element that shines through – a reminder of the Light and our lineage.

The Temple of Light was always more than a building. The Temple is promise, manifestation and trust.

It has always been deeply meaningful to me that Swami Radha trusted the visions she experienced since she was a child and that she waited 75 years until the Temple came to be.

I was present with her in Many Mansions, when the walls of the original Temple (which were erected all at once) went up. It was a magical moment. Swami Premananda had built several small Temple models with a light inside and one of them was sitting on top of her shrine. Swami Radha said, “The Temple has been so long in the Unseen, now it is here.” And she said the small temple could now come off the shrine as the real Temple had manifested.

The fire was unbelievable at first and we all kept hoping to save what we could. First we thought it was just the roof that would have to go. Then we found that the arches were badly damaged. Next we realized that the walls had to come down, so the whole Temple was deconstructed right down to the lotus pad. It was a process of peeling away, deeply grieving, like at the death of an intimate friend or family member.

And yet in the midst of all this there were miracles. All of the precious objects on the altar, the crystal and the photographs came through without damage. The two large photographs of Swami Radha and Swami Sivananda that were in the hallway came out without even any smell of smoke! We were able to save so much and none of the other buildings or trees were even touched by a spark.

The biggest miracle to me is how we supported each other; we met and talked about our grief and feelings of loss; we did practice together; we had inspired satsangs. And we kept taking steps. There was no doubt in our minds that we would rebuild and we kept moving towards this new possibility.

The huge response from our Ashram teachers and friends from all over the world who have been touched by the Temple, built a great trust in me that there is a deep meaning to what is happening. The love and concern and sharing of loss and the immediate response of sending donations was deeply meaningful to me, and to everyone at the Ashram.

Underlying the loss there has always been a knowing that there is another purpose and that in some way Swami Radha is still holding her vision in the Unseen. It is an inspiration for me to hold to the vision I have of my own potential and to keep taking the steps to let it unfold.